Of all our tapestries, the A-Z Animals designs present some real design challenges. For one thing, there aren’t many squares/stitches to work with (only 96 each way) and each design has to encapsulate a feel good and timeless image of the letter depicted, and have equal appeal to boys and girls.

Last year I thought I’d finally managed to conquer ‘Z for Zebra’ (you can see part of the design for it in the first image, below). I even went so far as to have it stitched and photographed ready for its packaging label, but when it came to it I knew it wasn’t good enough.

Knowing that some customers have been patiently waiting for a ‘Z’ kit for some time now, I returned to the original design many times earlier this year, foolishly thinking that I could tweak itand all would be well. No, there was nothing for it but to start again from scratch. I thought you might enjoy seeing some of the stages as a design is built up.

To start us off, Z is for zigzag. In the original design, I had zigzags in the border. This time roundI decided they’d look better behind the zebra itself. Here they are, set as a background to the zebra… 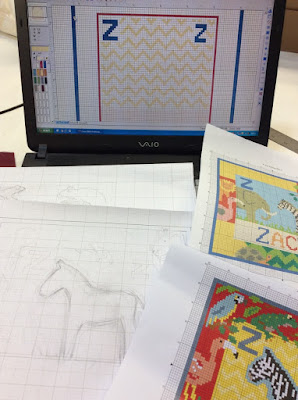 Zigzags in place, it’s time to add the zebra. The positioning of the animals is always key. I had to fit the zebra’s head between the two Zs, and that determined the finished zebra’s size.

Building the design now, and you see that turquoise border around the zebra? That’s a little trick to stop the zebra disappearing into the background zigzags. Imagine the zebra without the blue, all his white stripes would merge in with the pale yellows and he wouldn’t have a proper outline. 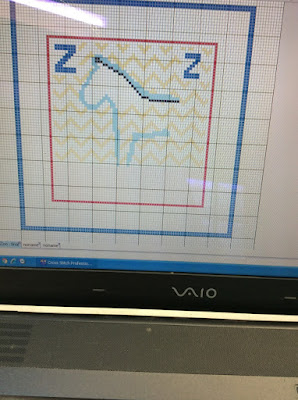 Getting somewhere now, the zigzags are there and the zebra himself looks very settled and contented. Time to add more animals in the border because Z is also for zoo.

Now time to bring in some favourite zoo animals and birds – an elephant, a parrot, a frog and chameleon, soon to be joined by a monkey, lion, a flamingo and two penguins. Feeding the penguins was always a highlight of a trip to the zoo for my two boys when they were little, so we’ll include some fish too. 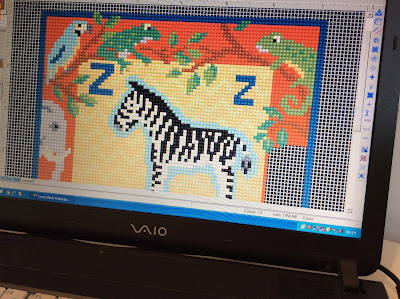 After fiddling about with wool colours and stitching up a colour sample, finding two shades of yellow and a white for the zebra to look good together and don’t all merge (or look too bright), it’s time to send the new and improved Z for Zebra off to be stitched.

And here we have it, the final Z for Zebra. It’s so much nicer now, I hope you agree! The original design had a red border but we believe that orange is much more on trend particularly when set into a smart grey border. 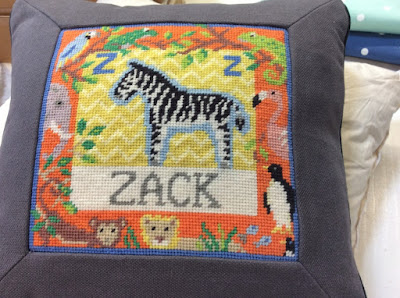 And if you don’t have a Zack, Zachary, Zac, Zara, Zoe, Zane or Zebedee in your family but like the zebra theme? Either leave the initials out altogether, or stitch the initials that you need. Over the years we’ve seen the A-Z Animals stitched many times with alternative initials, it really doesn’t matter!

Z for Zebra is now with our printer so we’ll soon have some lovely printed canvases, and we’re about to get his packaging printed too. We’ll despatch all orders as soon as the canvases and wools arrive. 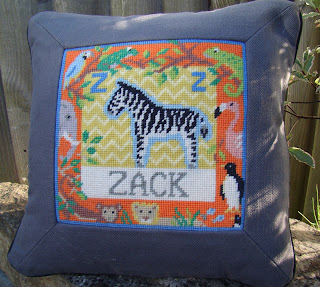 Choosing a tapestry frame
Christmas
Customer creations
Fabric for your tapestry
— Woolly, cotton or velvet?
In our Somerset HQ
Latest goings on
New designs
Our visitors
Out and about
Stitching for Macmillan
Top tips and woolly wisdom
Weddings and anniversaries

Join us for the latest tapestry talk and design previews. We only email you when we have something to say!

Orders to EU countries
If you are ordering from an EU country, please note that we have removed the UK VAT charge from your order but you may have to pay a tax charge in your country to receive your parcel.